The philharmony of Steenvoorde was founded in 1806 as 'majorate' of Peter Beck -Auguste by former military musicians of the Napoleon army.

In 1820 it became National Guard Music (Our flag is dated from 1820). The drummers were Joseph and Castelnot Ryckebusch.

However, one must wait until 1830 before the "Music association" of the National Guard would receive an annual bonus of 100 F. It was received by Mr. Berthelot, the following ones by Joseph Beck. In the 1830s, Joseph Beck was the captain of the association and will remain so until 1848, when he was nominated mayor of Steenvoorde, later he became General Councillor of the new canton Steenvoorde.

The conduction was assured by Pierre Salan and then by Mr. Devet.

In 1843 is the municipal music teacher Stanislas Verroust from Hazebrouck. He will be very quickly replaced by a native Charles Braem. In 1844 the association takes part in the competition of Bailleul and receives his first flag on October 13th, 1847 (it costed 75 F).

In 1848 Captain Louis Verbeke became captain chairman. The association marches to Hazebrouck, with the fire department and the armed National Guard.

The sub-prefect presents the flag of the battalion to the commander from Steenvoorde. In 1849 we buy 150 F shakos: our numbers are increasing.

For 10 years, the captain-chairman is Louis Verbeke. In 1858 he cumulates the conductorship and the chairmanship. 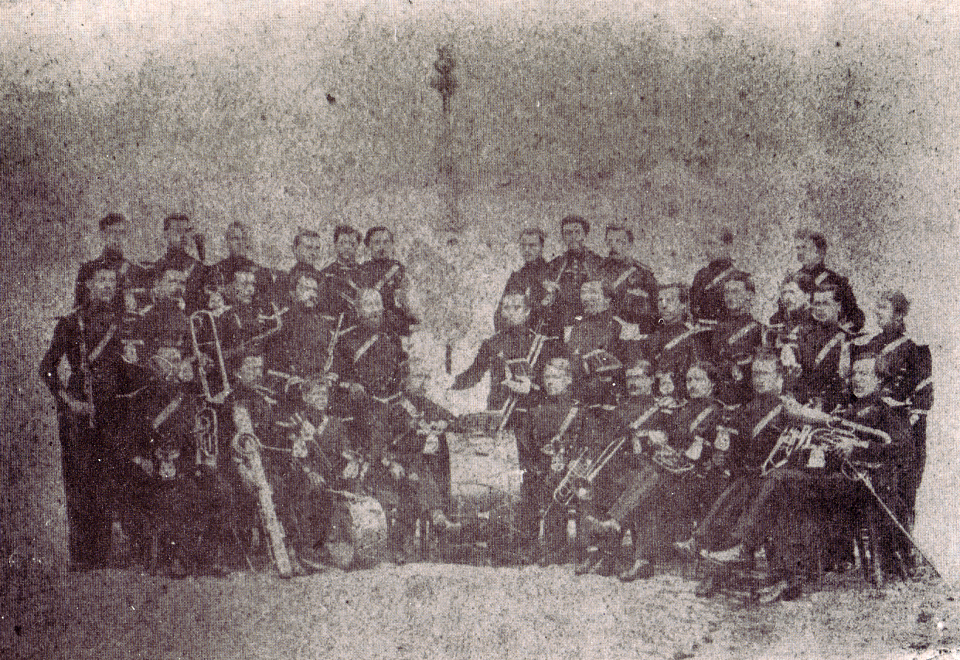 1868: The studio Devolder Poperinghe Fotographie Music of the National Guard of Steenvoorde (32 members).

The articles of association have been deposited and accepted on June 8, 1878. Captain Louis Verbeke is chairman Edward Serlooten vice president, Jules Serlooten Snyders secretary and treasurer.

In 1879 the association has 31 playing members and 39 honorary members.

In 1885: the association has 35 playing members. Captain Louis Verbeke, the chairman, is on the right.

In 1890, the association celebrates the anniversary (50 years membership) of Louis Verbeke and Edward Serlooten.

August 5, 1893: The kepis, swords and some costumes are replaced by Désiré Verhee, tailor in Hazebrouck for 867.75 F.

November 10, 1894, the kiosk at the main square at which the association gives concerts, will be repaired by Peter Vuylsteke master carpenter in Steenvoorde.

In 1895 Alphonse Outters mayor of Steenvoorde proposes to buy tissue for the renewing of worn costumes from the music and the fire department "step by step as it's needed."

On October 5, 1895 the kiosk is covered according to the plans of Mr. Dehaudt architect in Lille.

On June 15, 1895 the worn costumes are replaced by la maison Mirou from Lille.

On September 26, 1896, other costumes are renewed by Paul Cappelaere, tailor in Steenvoorde.

On February 12, 1898 Louis Verbeke is promoted as officer of the Academy.

He is a 58 year member of the association and is the conductor for 40 years. 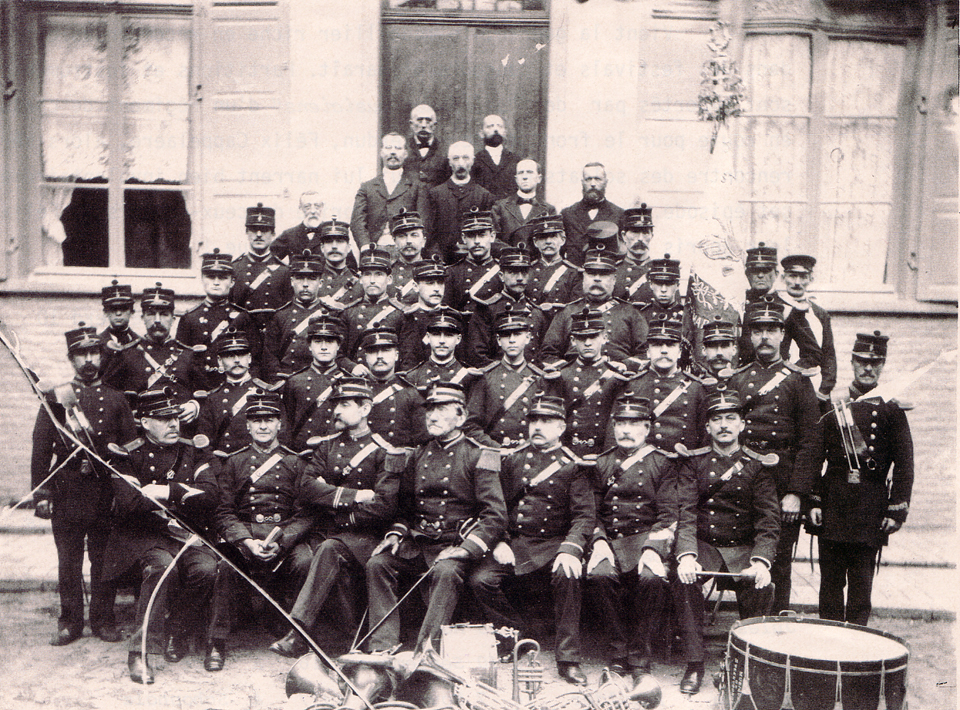 The Philharmonic Society in October 1895: 35 musicians.

In 1905 the Philharmonic Society enrolled in the Music Federation Nord et Pas-de-Calais under number 549 and plays in the third division with 47 musicians. The 47 musicians stay until 1914.

Then came the war, the medal show case full of awards at festivals and competitions disappeared. Scores and instruments are taken by "fellow musicians" from a regiment of hunters on their way to the Belgian front. Felix Cappelaere, then sergeant, met in Verdun musicians soldiers and forced them to tell this period. It was a big surprise when Felix told them that they she had robbed "his" music!

During World War I the association lost 10 members.