The war interrupts the revival of the association. A large number of members are mobilized.

May 1940: Steenvoorde is occupied by the Germans. Some musicians stayed.

... 1941 ... 1942 ... 1943, Prisoners are returning, including the Théry the conductor, and a group of musicians gives its support to parties organised by the released prisoners to help the Comité Communal, set up in 1940 to send kits to the prisoners from Steenvoorde.

The sessions were more than once ended with the Marseillaise, the present Germans could do nothing but to salute ... or to leave.

The Philharmonic Society can, as a result of the occupation, only attend the funeral  in civilian clothes and without instruments.

On October 16, 1943, the members of the Philharmonic Society are united at headquarters for the general assembly. 26 musicians are present. The conductor accepted, with pleasure, to restart the music lessons.

Then comes the liberation, September 6th, 1944, the Germans are still in Callicannes when tricolore flags are pulled out from the attics, and the philharmony gives a concert under the kiosk. In the evening she plays a Bal Populaire on the Grand Place.

It is still waiting for the return of Etienne Sansen, Sepieter Michel, Georges D'Haudt, Michel Carton and Alfred Heyman from captivity.

The Banquet of St Cecilia in 1944 has place. On the menu: Jeannot rabbit (permitted without ticket), and each gives his contribution in coupons for bread.

On January 29, 1945 a new mourning affects the society in the person of Gaston Sansen (member since 1894). His son Etienne has not yet returned from captivity. 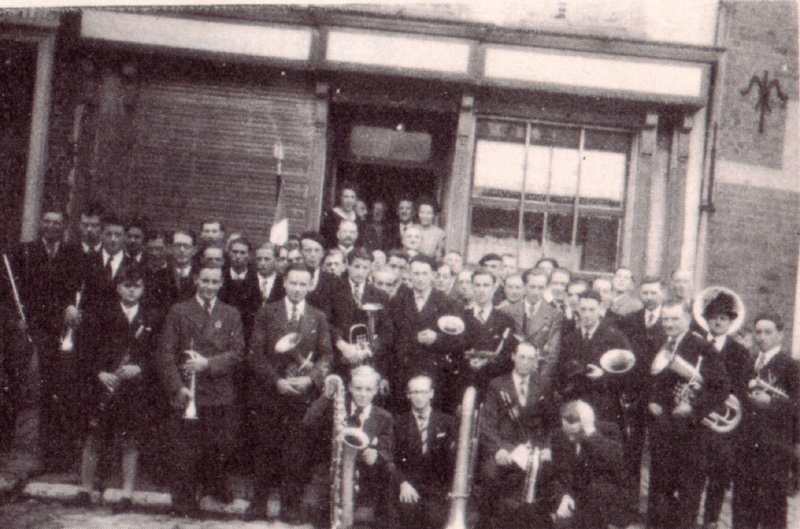 July 27, 1945: The association is again complete and proceeds to the election of the Administrative Commission. Then followed by the aubades of elected members (August 19th 1945) 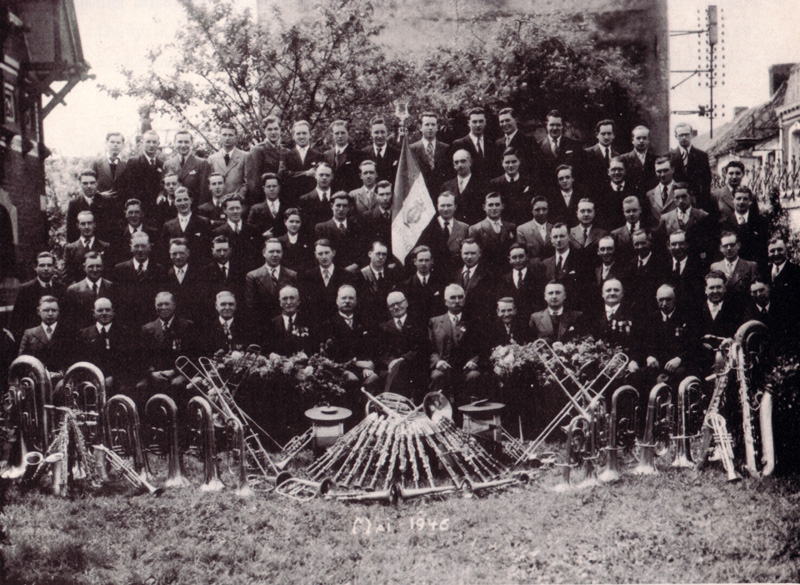 On Sunday, May 19th, 1946: To commemorate a big group of decorations a photo was taken at the parc of Felix Delobeau. The Philharmonic Society has 70 members.

On January 6, 1947 was the funeral of Gillodts Lucien, he joined the association in 1896, and was holder of the Etoile Fédérale.

Monsieur Robert Théry (conductor) and Albert Coudron (vice-conductor) form feverishly new musicians. These are 56 to strengthen the ranks of the philharmony between 1944 and 1950.

On Sunday, January 29th, 1950 the philharmony receives a new uniform: aviator style. Accompanied by the Fire Department, which also received a new uniform, the uniform is presented to the council. 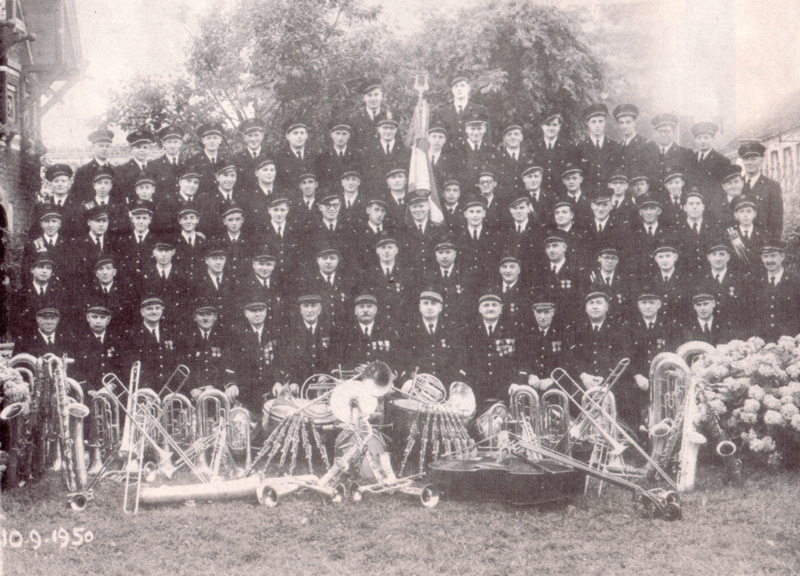 September 10, 1950: at the occasion of the presentation of the decorations, the studio Apfel photograph. The association has 80 members. 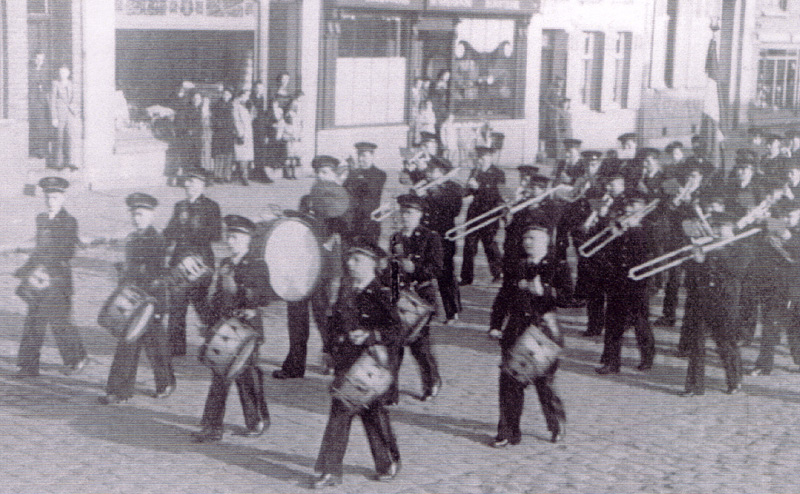 Yet in September 1950, the Philharmonie on the Grand Place. We see the arrival of the drummers.

On Sunday, April 20th, 1952: This is the first excursion of the harmony with drummers led by drum major Claude Becuwe.

The musical level has evolved since 1943: great ballets and big overtures are on the program. Very big music played by voluntary musicians. The credit goes to conductor Robert Théry which does not spare his time to devote himself to the music association. He knows each time his musicians to push the limits of their talents. The association acquired a certain regional and extra-regional reputation. 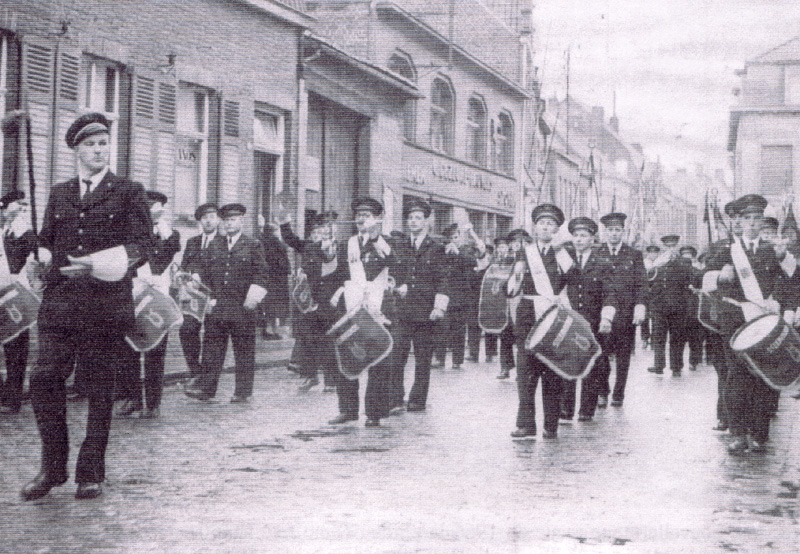 September 1954, the city of Poperinghe celebrates the 10th anniversary of the liberation. France, represented by the Philharmony of Steenvoorde, opens the parade.

December 29th, 1954, the musicians learn the death of their chairman: Felix Delobeau.

On August 13, 1955 Felix Cappelaere becomes his successor, he joined the philharmony in 1910. Florent Becuwe is vice chairman.

On May 15, 1960 the conductor Théry is honored for 25 years of conduction and chairmanship for 50 years of membership in the association. 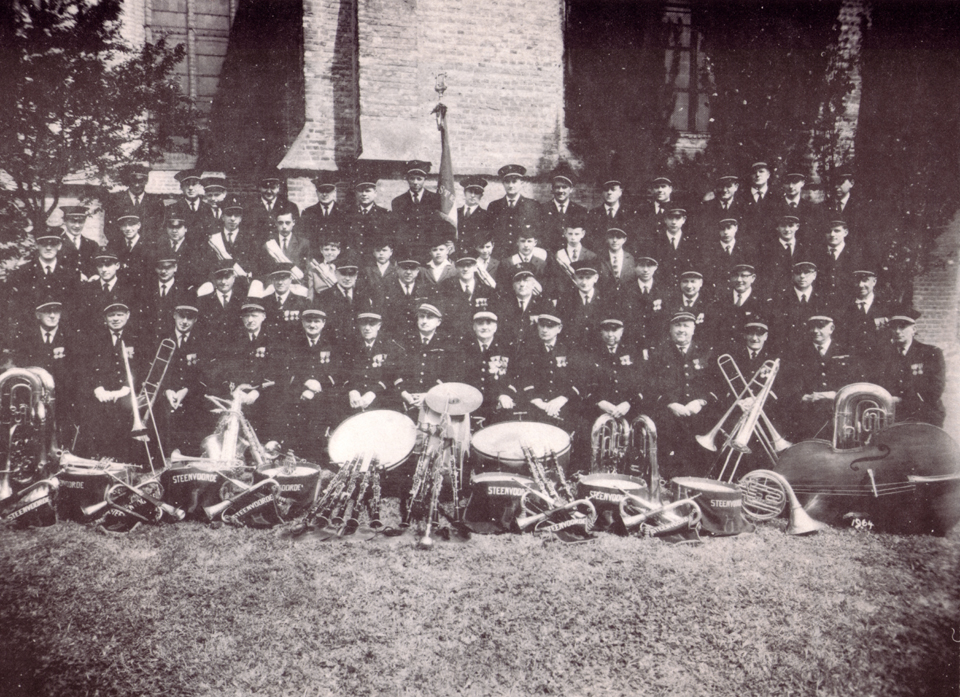 On Sunday, July 17th, 1966 the Philharmonic Society receives a new costume. This is the day of the 'ducasse' and the council receives the musicians at the Town Hall.

On May 24, 1970, the association celebrates its 150th anniversary (see "The Philharmony and local festivals").

Many musicians are honored, including the chairman Cappelaere for 60 years of membership. During the celebration the philharmony interprets Wagner's Lohengrin and Joyeuses Commères of Windsor by Nicolai. In the afternoon a music festival unites 8 associations.

The next week the philharmony loses its honorary vice-chairman Arthur Denaës with 68 years in the association. On May 24, he received the Gold Medal of the city of Steenvoorde.

The Philharmony is almost 160 years. A large family where joys and sorrows are shared.

Joys: weddings, decorations, the success of one of its members, JL Dewaele, at the Conservatory of Lille ...

Griefs: the death of some members and board members: 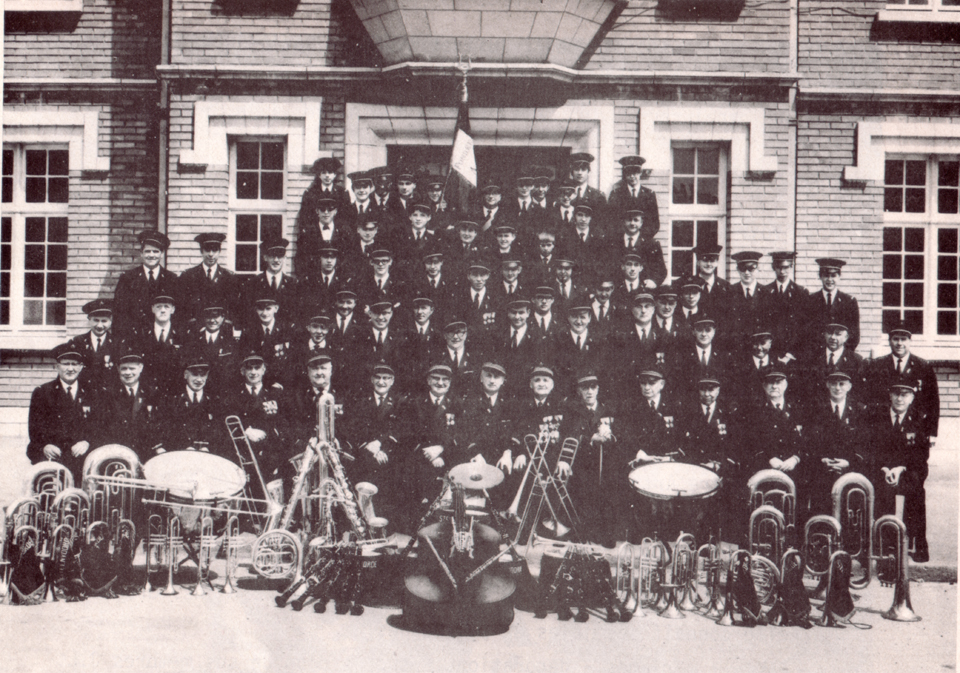 December 14, 1975, André Hauwen and Felix Cappelaere (vice chairman and chairman) are asking to be relieved of their administrative functions letting the place for to the younger people.

On December 27, 1975 Claude BECUWE was elected as the vice chairman and a year later, after having been an intern, as president. He becomes the ninth chairman of the Philharmonic Society of Steenvoorde.

On October 1, 1978, after 42 years, Robert Théry asks the right to retire. As the statutes prescribing, the association holds a general  assembly and elects Daniel Francke conductor of the Philharmonic.

In 1979 the association loses its vice-chairman Michel Carton, holder of the Etoile Fédérale and the esteemed assistant conductor Albert Coudron, teacher of the copper instruments and baritone solist.

On the eve of Saint Cecilia, succumbs honorary chairmain Felix Cappelaere on the way out of the music room, felled by a heart attack. He was a musician since 1910.

For this St. Cecilia, the Philharmony is dressed in a new uniform designed by Jean-Yves Cnapelynck. It is candled by the municipality. 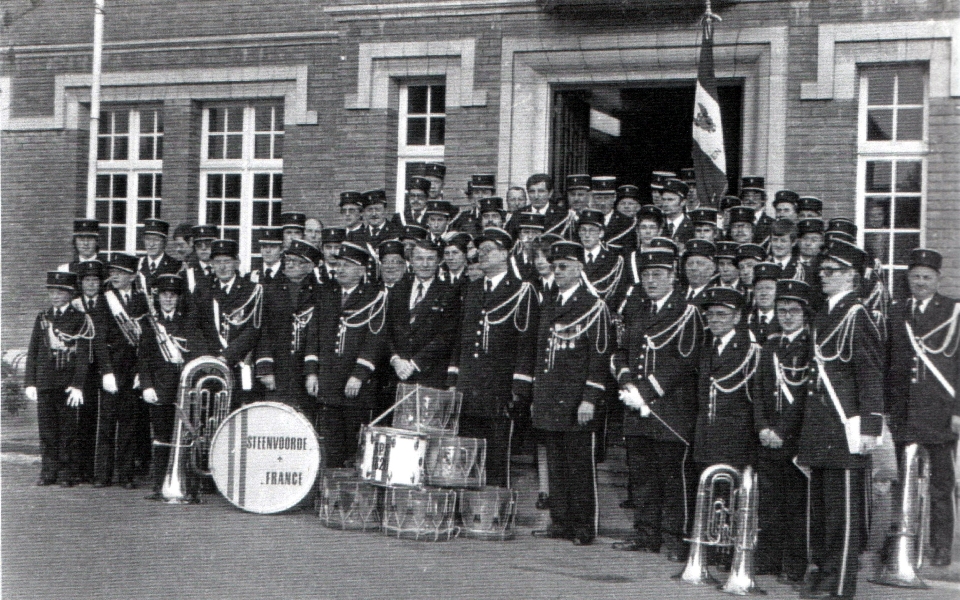